Why you procrastinate and how to stop doing it

Stop procrastinating! If only it was that simple.

For around 20% of people, procrastination is a way of life. They leave deadlines to the last minute, put off going to the doctor for check-ups, delay answering emails (or use emails to delay doing other things), rarely leave the house on time, fail to go to the gym, ring their parents, do their laundry, update their CV, or any number of things that could help them succeed.

Experts define procrastination as the ‘voluntary delay of some important task that we intend to do, despite knowing that we’ll suffer as a result.’

Procrastination is a form of self-sabotage that we’ve all experienced. However, Psychology Today explains that chronic procrastinators (that’s a real term) deliberately put obstacles in the way of their own success. But why?

Procrastination existed long before the distractions of Facebook, cat videos and TikTok dance trends. The dawn of the internet has led to a sharp rise in procrastination, according to a study by Webtrate, the internet blocking software that claims to help you concentrate and boost your productivity. But procrastination is actually a complicated failure of self-regulation and an inability to manage emotions that has been going on since ancient civilisations.

It’s clear that the way to fix this for many people is to simply stop procrastinating. But it’s not as simple as that.

“To tell the chronic procrastinator to ‘just do it’ would be like saying to a clinically depressed person, cheer up,” says Professor of Psychology, Joseph Ferrari. 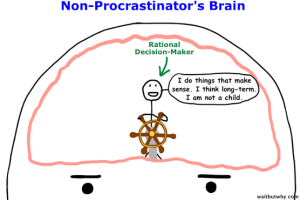 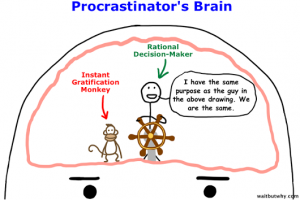 The difference is the existence of the Instant Gratification Monkey. “This would be fine—cute, even—if the Rational Decision-Maker knew the first thing about how to own a pet monkey. But unfortunately, it wasn’t a part of his training and he’s left completely helpless as the monkey makes it impossible for him to do his job,” the article explains. 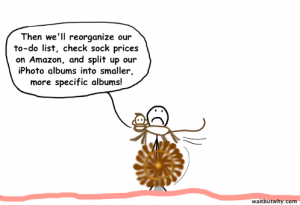 The above diagrams actually do a pretty good job of explaining a rather complicated psychological theory. The Instant Gratification Monkey only thinks about the present, ‘ignoring lessons from the past and disregarding the future altogether.’

The result is that the procrastinator spends too much time putting off unpleasant or daunting tasks. This makes them feel better temporarily, but eventually, as the deadline gets ever closer, feelings of guilt and dread kick in, which in turn makes them want to put the task off more, causing a self-defeating cycle that eventually turns into this: 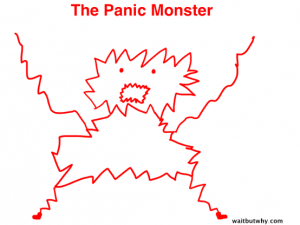 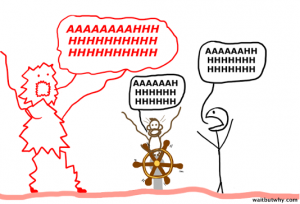 But why don’t procrastinators learn from their mistakes?

Ever found yourself saying ‘I’ll feel more like doing this tomorrow’ or ‘I work better under pressure?’ You’re probably lying to yourself.

“We’re trying to regulate our current mood and thinking our future self will be in a better state. They’ll be better able to handle feelings of insecurity or frustration with the task. That somehow we’ll develop these miraculous coping skills to deal with these emotions that we just can’t deal with right now,” explains psychologicalscience.org.

How to stop procrastinating

Breaking the procrastination cycle isn’t about time management. Most procrastinators know how to create a to-do list or a schedule. Here’s how to interrupt the negative emotions that are getting in the way:

(For more on this subject… the author of the Wait But Why article gave a brilliant TED talk on the subject, with more than 54m views to date – you can check it out here.)